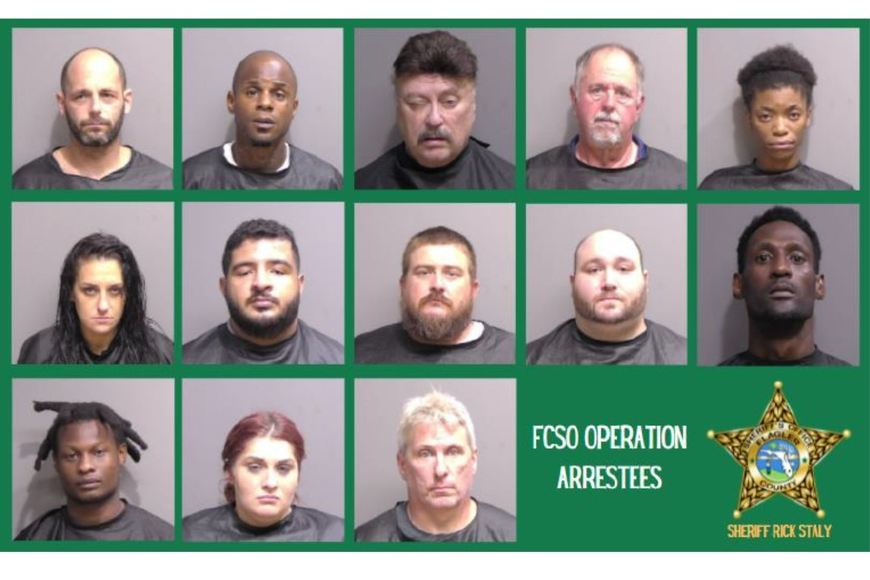 Florida – FCSO made 13 arrests in a two-day operation, which included a variety of prostitution, narcotics, and firearm-related offenses.

During this month-long operation, 29 victims were recovered, 31 traffickers were identified, and a total of 363 arrests took place during the Task Force’s “Operation Breaking Chains.”

The Florida Sheriffs Association Task Force on July 22 released the results of Operation Breaking Chains, a strategic initiative in 16 Florida counties that focused on reducing human trafficking throughout the state and prosecuting those responsible for trafficking individuals.

This operation focused on individuals soliciting prostitution services online on websites specifically utilized for prostitution advertisements, suspected prostitutes’ transporters and handlers, as well as subjects who are attempting to procure sexual services from these individuals.

“We partnered with the FSA for this state-wide operation, which led to the recovery of drugs, firearms, and the rescue of a victim of human trafficking.” Sheriff Rick Staly said.

This countywide operation successfully led to the discovery and interception of a victim of Human Trafficking.

“These are not victimless crimes and we will continue to work to end human trafficking, prostitution, and drugs in Flagler County.

I want to thank our Special Investigations Unit, Homeland Security Investigations, and our PACE team for their incredible work during this operation.”

“The dedicated enforcement of state laws that deal with businesses suspected of human trafficking and online operations will help to keep us all safe.”