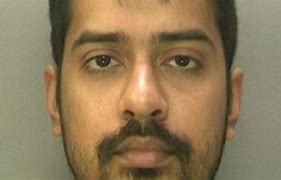 Abdul-Hasib Elahi, 26, targeted nearly 2,000 people across the world. Some of his victims were as as young as 8 months old, the U.K.’s National Crime Agency (NCA) said in a statement released on Monday.

Elahi, from Birmingham, England, singled out victims who were in debt or too young to legitimately be on “sugar daddy websites.” He then tricked them into sending him naked or partially clothed images of themselves, said the NCA.

The agency described the case, which saw victims blackmailed into abusing themselves, siblings and children, as “some of the most sickening sexual offending” it has ever investigated.

According to the NCA, Elahi’s offenses “included forcing victims to abuse themselves in sickening ways including self-mutilation, blackmailing women to send him footage of them abusing young children and making girls abuse siblings.”

Tony Cook, NCA head of CSA operations, said investigators were “horrified by Elahi’s sadistic depravity and stunned by the industrial scale of his worldwide offending.”

“Elahi sought sexual gratification from having power and control of his victims and he’s displayed zero empathy for them. He often goaded them to the point of wanting to kill themselves,” Cook added.

An investigation across multiple jurisdictions, including the FBI, revealed there were at least 196 victims in the U.K. as well as victims in 20 other countries including the U.S., Australia, Canada and New Zealand.

A further 600 people were found to have been contacted online by Elahi in the U.K. and another 1,367 women, which he tried to contact, in the U.S.

Elahi has admitted to the charges relating to 158 offenses including blackmail, disclosing private photos, distributing indecent images, causing a child to engage in sexual activity, fraud, possessing extreme pornography, causing or inciting the sexual exploitation of a child and possessing more than 65,000 indecent images of children—including babies being raped.

He was charged by the Crown Prosecution Service and remanded in August 2020.

Cook commended the victims in the case for their bravery, saying the effects of Elahi’s abuse would “continue throughout the rest of their lives.”

“Sadly there are very many offenders like Elahi who mask their real identities with convincing personas to exploit both children and adults,” he said.

The investigation also sparked a series of other inquiries into Elahi’s associates, including Kirsty Nicholls, 35, from Middlesex, in the U.K.

Nicholls, from Middlesex in the U.K., previously pleaded guilty to two charges of sexual assault of a child and one of making an indecent photo.