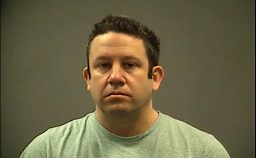 JOLIET, Ill. — A former suburban Diocese of Joliet teacher who was fired after he was charged with child sex crimes has been released on a $10,000 cash bond.

Jeremy Hylka is charged with child grooming and other felonies after a video was posted online two weeks ago. A cell phone camera was rolling as police say Hylka showed up to a Joliet McDonald’s under the impression he was meeting a teenage boy for sex.

Reports has obtained an email that was sent to Joliet Catholic Academy in June 2020 detailing allegations of at least 15 young men who claim the longtime teacher acted inappropriately.

Although the charges were just filed, Joliet Catholic Academy was alerted to sexual misconduct allegations surrounding Hylka nearly a year ago.

“This was sent to the principal last June,” said Amanda Johnson, a Joliet Catholic graduate.

Johnson said she reached out to the school to alert them of these claims.

“I have received messages from more than 15 young men who have attended JCA within the last decade who had encounters with Jeremy,” Johnson said.

Johnson said she also spoke on the phone with the JCA principal and contacted Joliet police.

“That conversation led me to believe that something would come of it,” Johnson said. “I assumed that even one person was enough at that point – whether they wanted to stay anonymous or go on record.”

Johnson said she collected evidence and trusted the school to investigate.

“I gave it to everyone I was supposed to,” she said. “I tried to handle it with respecting everyone’s privacy but also gave them what they needed to get the ball rolling.”

Joliet Catholic Academy said they were made aware of online allegations against Hylka in June 2020. JCA said they immediately notified Joliet police and worked with the Diocese regarding the investigation. JCA officials said Hylka was put on leave and subsequently resigned as a result.

“I do not know if they did everything that they could have,” Johnson said.

After resigning from Joliet Catholic Academy, Hylka was hired at St. Joseph Academy in Lockport. He was placed on leave in January as he was investigated for sexual abuse claims. Parents at St. Joseph were never notified about that investigation. He returned to work and was only fired after his arrest.

“Every time over the past year when someone tried to blow the whistle, they were blocked…whether it was actually blocked on Twitter, or just no returned calls, no returned emails,” Johnson said.

She’s hoping others come forward to speak up about the allegations.

“I am not a victim, it’s never been about me,” Johnson said. “Anything outside of pursuing the truth or what was going on felt like complacency.”