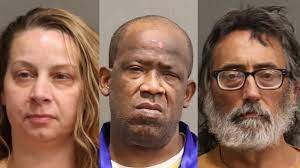 Tennessee – Special operations incidents are underway at a business south of downtown Nashville and at a home in Antioch Thursday morning connected to a months-long sex trafficking investigation.

Tactical officers along with Metro police are on the scene of a business in the 600 block of Fesslers Lane in addition to a home on Bluewillow Court.

Search warrants were issued on a makeshift recording studio on Fesslers Lane and a home on Bluewillow Court in Antioch.

Those arrested are Charles McGlother Jr. (50), his girlfriend, Karen Bailey (41), and Charles Sumner (60), all of whom live at the home on Bluewillow Court. All were arrested on Bluewillow Court Thursday and two women were also with the suspects. The women told police they were being trafficked.

cGlother ran the small recording studio on Fesslers Lane that is believed to be connected to illegal activity, including drug sales, police say. While the Antioch home was searched, a warrant said police found a stolen handgun in McGlother’s room, along with 12 grams of heroin, three grams of crack cocaine, 13 grams of methamphetamine, 15 grams of marijuana, scales, and cash. No one was at the recording studio during the execution of the search warrant.