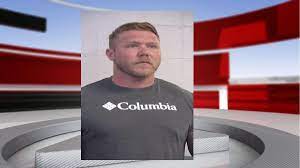 A Louisville Metro Police officer is accused of sending a sexually explicit photo of a woman to more than a dozen people without her consent.

Officer Harry Seeders, 32, was arrested Monday and charged with one count of distribution of sexually explicit material without consent.

According to court documents, Seeders sent an “image of the victim’s exposed breasts to 19 people in a group text message without the victim’s consent.”

Some of the people in the group text were friends or acquaintances of the victim, according to the police report.

Attorney Steve Schroering, who represents Seeders, said he was on administrative leave from a previous domestic violence incident but remains on the force.

An LMPD spokesperson said “Seeders was placed on administrative leave yesterday due to pending criminal charges.”

Seeders was charged in May 2021 with assaulting a woman he was dating. According to the arrest citation, Seeders hit the woman in the mouth and then choked her for around 30 seconds.

Those charges are still pending in Jefferson District Court. A hearing is scheduled in the 2021 case for Wednesday.

The domestic violence charges came as Seeders was on administrative leave after he shot and killed a man in the Portland neighborhood on Nov. 22, 2020.

Body camera video shows Seeders approaching a car from the rear, but at a certain point, Seeders’ camera falls off. As the car moves back, it appears to touch Seeders. At that point, with the camera facing the pavement, five gunshots are heard.

“He’s in the front seat,” Seeders says as other police apparently arrive on the scene near 22nd and Gilligan streets just after 10:15 p.m. “He’s hit. He’s hit. He ran over me with the car.”