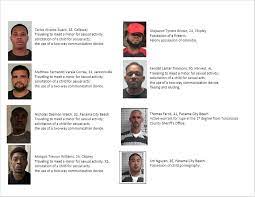 Operation Rogue Wave began May 18th and ended May 22nd. It included the arrest of 21 men allegedly involved with human trafficking and internet crimes involving children.

Charges included traveling to meet a minor for sexual activity, solicitation of a child for sexual acts, and possession of child pornography.

Chief J.R. Talamantez said parents need to monitor children when they use the internet.

During the operation, 13 people were arrested for traveling to meet a child for sexual activity and six were arrested for possessing and or distributing child pornography. Nineteen of the men arrested are from the Panhandle. Three others have warrants issued for their arrests.

“You might as well come on in to the police department and turn yourself in,” Talamantez said.

“The internet is not a safe place, it is not a place our children need to be unsupervised,” Talamantez said.