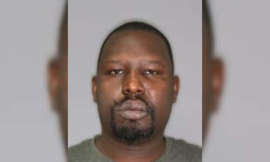 Police have issued a Canada-wide warrant for a 33-year-old Ahmed Adam after an investigation into human trafficking in Saskatoon that spanned more than a year.

Saskatoon police say they are aware of one victim who was reported to have been trafficked by Adam, with the two parties being known to one another, and investigators say they believe there are other victims.

The investigation started in July of 2019 and charges were laid after more 15 months of investigation by the city police service’s human-trafficking and VICE units.

Adam may be in Saskatoon, but police say he also has ties to other communities in Western Canada including Calgary and Edmonton.

Police say he stands roughly six-foot-three and weighs roughly 195 pounds. Anyone with information about Adam’s whereabouts is asked to contact their local police department or Crime Stoppers to report the information anonymously.

They stress that if you, or anyone you know, is involved in forced prostitution or labour, they should contact the Canadian Human Trafficking Hotline at 1-833-900-1010 where they can find support and help if desired.