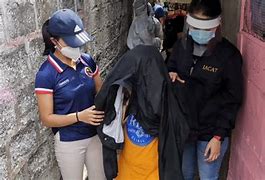 Three children have been rescued in the Philippines and two Australian men have been arrested as part of a multi-national investigation into a paedophile ring.

The children, aged between six and 17, were saved from ongoing alleged sexual abuse in Manila after the Australian Federal Police (AFP) referred intelligence to Filipino authorities.

Two women, both aged 27, were also arrested in the Philippines capital for their alleged role as facilitators of online child sexual abuse.

A 66-year-old man from Jamboree Heights in Queensland has been charged with multiple child sexual abuse offences and a 40-year-old NSW man has also been arrested.

The man based in NSW had allegedly been communicating with the women in the Philippines to pay for online abuse.

“AFP child protection investigators work every day to help rescue some of the most vulnerable and bring the people who harm them to justice,” she said.

“For the AFP, this work is about the children we save. Our officers never give up, no matter whether a child victim is based in Australia or overseas.”

Janet Francisco, from the Philippines National Bureau of Investigation, said: “Together with our national and international partners, we work collaboratively to investigate, arrest and prosecute those who would commit harm against our children, while working tirelessly to rescue those children from harmful situations.”