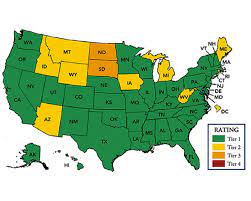 This is followed by Texas with 1,080 cases, Florida with 896 cases, and New York with 454 cases. These four states with the highest human trafficking rates have the highest populations in the U.S., which can explain why their numbers of cases are significantly higher than other states and very high immigrant populations. This, combined with certain industries such as agriculture, creates prime environments for forced labor.

Here are the 10 states with the highest rates of human trafficking: