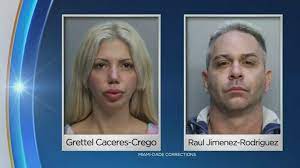 The victims said the two men knocked on their door, and apparently had on masks.

“And when the victims went to open the door, they were armed with firearms and robbed the victims,” Ponce said.

According to State Attorney Katherine Fernandez Rundel’s office, one of the victims, one of those victims was at the location awaiting a pre-arranged prostitution encounter.

“Our officers were able to identify specific things during their conversation that they were able to pry at which point the victim came forward and advised that yes she was in fact a victim of human trafficking.”

Through the investigation, the two other people were arrested. 40-year-old Raul Antonio Jimenez-Rodriguez and 30-year-old Grettel Caceres-Grego are facing charges that include, human trafficking and directing another to a place of prostitution.

“Broward was one of the places that she was trafficked in, as well as Tampa,” Roger Dehart said.

He has not only witnessed hearings on human trafficking, but he says people he’s known to have been people affected.

“Violence towards her kids at the time were 8 and 11 so they had pictures of her kids, they knew what school they went to they did their research,” Dehart explained.

Too often people don’t know it is happening, that’s why Dehart is speaking out, and in the past has walked from Fort Lauderdale to Washington DC to raise awareness. It took 51 days he told CBS 4.

“I would encourage people to educate themselves.”

The US Department of State has a list of potential indicators:

“You know this isn’t just about Miami-Dade County or Florida as a whole this is an issue that’s going on throughout the nation, throughout the world, and we need the public’s assistance to put a stop to it,” Ponce said.